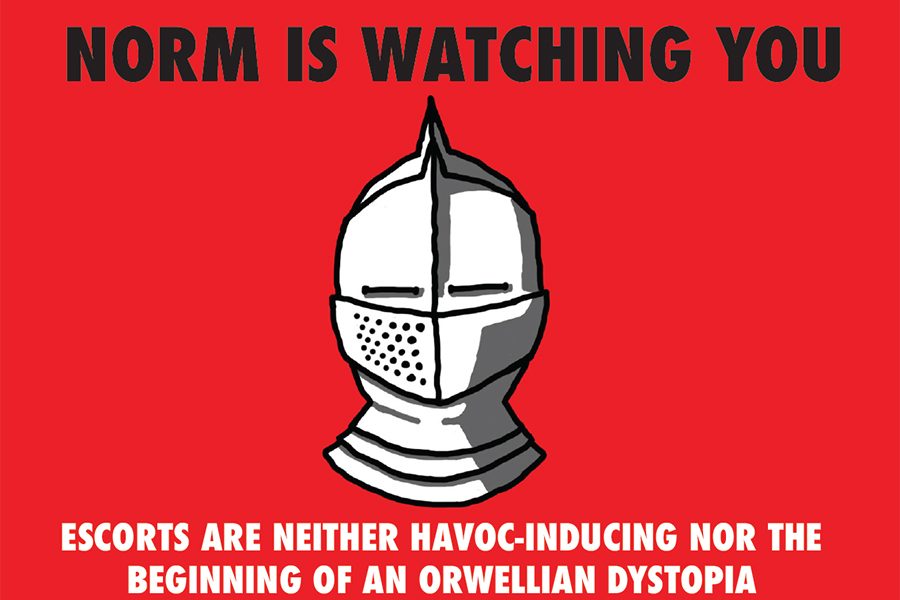 Students Need To Stop Panicking Over The New Escort System

At FHN, students are supposed to remain in their classes. This task appears to be surprisingly difficult. As such, FHN now assigns escorts to follow and watch students who leave their classrooms. Woe is us, FHN is slowly becoming an Orwellian police state. We already have cameras, now we have officially sanctioned observers; soon, the newspaper will become a pile of propaganda and our classes will be 70 percent secret police spying on the other secret police for signs of deviance and insubordination.

Calm down. The escort policy is only a real issue if you regularly leave the room during class; then, it might cause a bit of delay as you wait, but generally speaking a few minutes isn’t too long.

If you intend to do something that an escort would stop, you probably shouldn’t be doing it in school. At the very least, if observation is a concern, there are places other than the school you can do stuff at. Places without cameras. Or secret police.

The escort policy requires students to go with an escort when they leave a classroom during class; to go somewhere outside of passing period, their teacher must call an escort to go with them. Students who want to leave their classes will have to wait for an escort to arrive.

With a witness following them, students would find it harder to do anything against the school rules or to prolong their absence without being caught. Ideally, this would mean that they stop trying and stay in class, removing distractions from education and thus making it easier for students to focus.

This policy was put in place due to the number of students in the hallways during class. The administration decided to issue escorts to students to make sure that they do what they need to quickly so that they can go back to class as soon as possible, as well as ensuring that students only leave class with good reason.

The current escort system is still being adjusted; the administration is watching how effective it is and what about it needs to be changed. As of now, there is no set end point; if the policy proves ineffective, it will likely be modified or stopped. For now, it will be used for the rest of the school year.