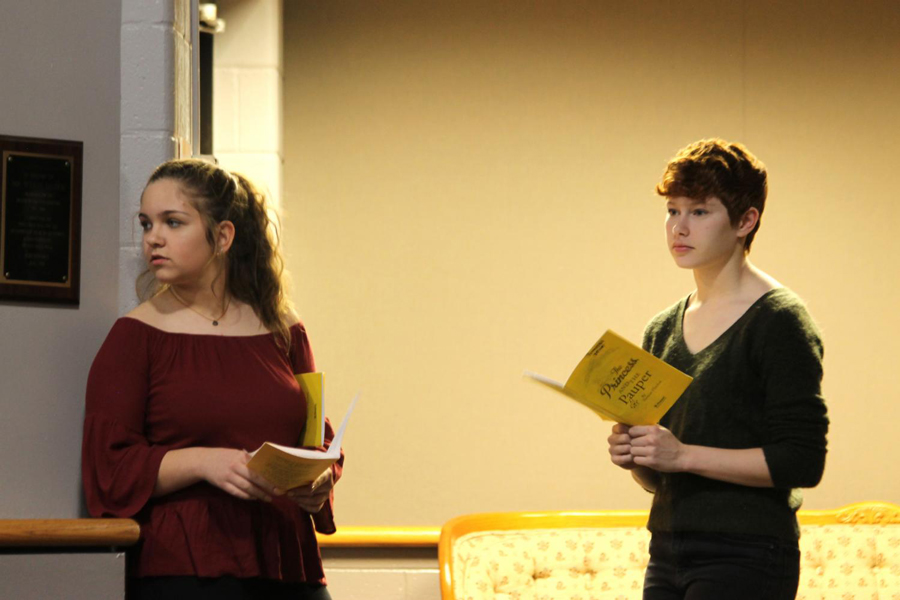 80 costumes, 75 hours of rehearsal, 55 cast and crew members, 17 set pieces, two stories, one night. On April 12-14 at 7 p.m, for the first time ever, the FHN drama club is putting on two separate shows in one evening. Each show, or act, will be about 60 minutes long, and the shows will be split by an intermission. The first show will be “Peter Pan” and the second, “The Princess and the Pauper.”

Tickets for the show can be bought online for $5 and tickets bought at the door for $8.  To buy tickets to the show online, go here.

“Peter Pan” will take the stage first in drama club’s spring play, allowing the club to reach a broader audience than the previous play this year. A story known by many, “Peter Pan” will not only excite younger generations, but also bring cheer to adults. With it’s adventurous, carefree tone, the play will start the night with a much lighter tone compared to the more-feasible story of “The Princess and the Pauper.”

The fantasy of “Peter Pan” follows a young girl and her two brothers as they meet Peter Pan and fly with him to Neverland, a place where time stops. In Neverland, the kids meet the lost boys and have fun, until encountering Captain Hook and his pirates, who wish to end all the fun in Neverland, giving everyone an experience to remember. Likewise, not only do the characters in “Peter Pan” experience an adventure, but the cast and crew for “Peter Pan” have also been on a journey while creating the production of this first act.

“Student directing ‘Peter Pan’ as your first show is definitely an experience, because there are so many people in the cast and so many of the scenes have everybody on the stage at the same time,” student director Riley Lawson said. “It’s definitely been fun and interesting and different, because I have to work out how to somehow fit 28 people on stage at the same time, who all have to talk and then move them around. It’s been fun. It’s just different from a lot of shows I know, because here’s a lot of action stuff that goes on, and there’s a lot of people on stage. It’s been trying to figure out how exactly to overcome that.”

Although it is challenging to work everyone on stage, “Peter Pan” allows a larger cast and crew than drama club has seen in a play recently, with over 40 cast and crew members involved. Not only that, but “Peter Pan” has also brought some creativity to the stage, using lights and mirrors to create Tinkerbell and using some set pieces for multiple scenes. This gives not only the crew new interesting jobs, but also gives the cast of “Peter Pan” opportunity to be creative with their parts.

“I am looking forward to it, because it’s a fun show, it’s super creative and it gives the chance to explore the stretch of an actor’s imagination,” senior Delaney Echelmeyer said. “I’m just hoping for another great show and a chance to show the capabilities of our drama program.”

And Lands in the 1700s with “The Princess and the Pauper”

“It’s really fun,” Kim Sulzner, Director of Theater Arts, said. “It’s really cute. It is a children’s show, but it’s got elements that are enjoyable even for adults, so it’s not just for little kids.”

Set in 1700s, Victorian England, the story of “The Princess and the Pauper” follows the stories of two young women, both from very different backgrounds, one a flower peddler and one a princess. Curiosity brings the girls together, but also pushes them into new lives. As they look nearly identical, the girls switch places, with the peddler becoming the princess and the princess becoming the peddler. However, upon trying to return to their normal lives, they soon realize they are trapped, leaving the audience in suspense.

“I feel like people watching it will be a little stressed, because there are aspects of it that are really suspenseful, and you don’t know what’s going to happen, and you hope everything’s going to turn out okay,” junior Jadon Herrman said. “You just have to come and watch. Overall, I think it’s very fun and the time period is fun, because I don’t think we think about it a lot. It’s the Victorian Era. It’s very big fancy dresses, and big shoulders and corsets and carriages. It feels very nostalgic, even though obviously none of us has ever been in that time period. It’s pretty cool.”

Not only is the time period a bit out of the ordinary for the FHN Drama Club, but the sets for both plays are also unusual. To make a different set for each play, the crew has created rolling sets, using both the inside and outside of the set for different scenes. However, “The Princess and the Pauper” goes beyond the set, with actors interacting with the audience and going off stage during the play, giving the audience a more personal experience.

“I think students should come and watch because, honestly, I think it’s a really cute show,” junior Jordan Milewczik said. “It’s so fun to watch everything, and it really does give you an aspect of ‘you get what you wish for’ or ‘be careful what you wish for,’ because that’s kind of a tone between both shows. I think people can pull stuff out of it. It’s a show that’s for literally everybody. I think everybody could show up, understand, enjoy and love the show, from kids that are five-years-old, all the way up to 90-year-old people.”