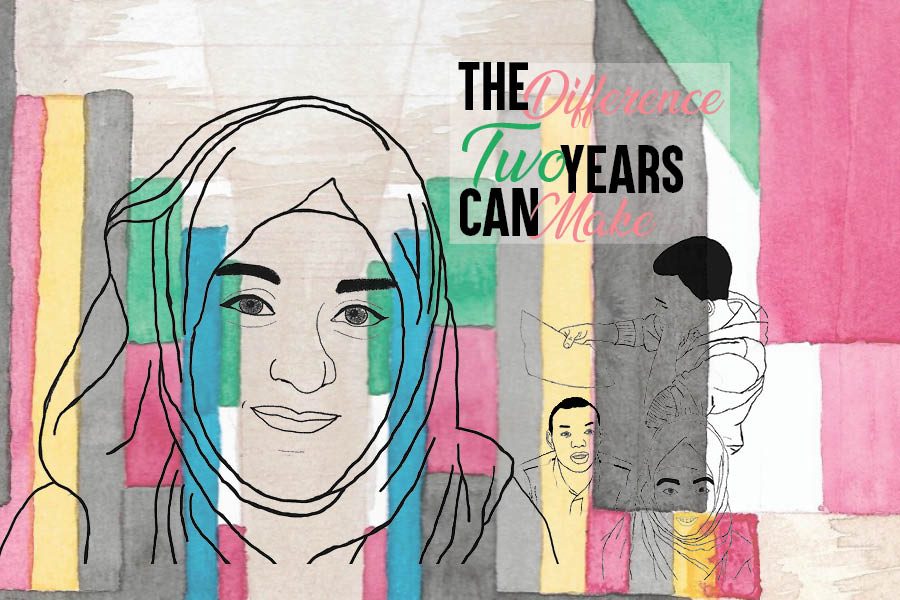 An Afghani student sits silently in the back of the classroom. She hasn’t spoken a word. Only silence. Only the fear of getting beaten if she gives the wrong answer. She was just a young woman. She was supposed to be submissive. There was only fear.

Her brother, though, sits in a full pod in middle of the classroom, eager to speak up. He was the man, though a young man.

A Congolese student sits at the front of the classroom, excited to be learning. She had never attended school. She stays for tutoring, she asks for help, she loves school. She still struggles.

Each student described is student sitting in a classroom at the NCNAA at Roosevelt High School. Though they have endured different struggles, they each still face the same challenge: learning English. Yet, at this school for newcomer Americans, teachers have only two years to teach their students English, American culture and every other subject needed to catch their students up to the average American high schooler.

Yet, these are not average students. Many of them are refugees, which are people who are forced to leave their home country and are unable or unwilling to return due to persecution, war or natural disaster. This means the schooling, lifestyle and background of each student can vary greatly, bringing lots of culture and diversity to St. Louis. A city full of refugee resettlement, meaning refugees are moved from one asylum location to St. Louis. Here, the refugees are given help to begin their new lives, getting help with housing, schooling, language services, etc.

“If you look nationally, a lot of newcomer programs are only one year, and I literally don’t have any idea how those kids survive,” ESOL teacher Keary Ritchie said. “Imagine learning [a Persian language] Farsi  for one year and then being put into the mainstream high school to take physics and biology and whatever, like what? So, we do two years at Nahed. Two years is really good for us because we are a refugee resettlement city, and when you take a lot of kids that are coming from pretty hard places, and they need time to just-as Kelly [Moore] puts it- [have] a soft place to land.’”

In 2017, two years ago, however, the scene looked a bit different. To start, the NCNAA program at Roosevelt didn’t exist. There was, simply, the Nahed Chapman New American Academy. One school housing grades K-12. At the time, enrollment was exploding. Students ate lunch in the auditorium, some classes had over 50 students, enrollment had doubled to over 600 students over a year. This encouraged the NCNAA to split, with the high school division of the NCNAA moving into an empty wing of Roosevelt High School.

Since the 2016 election, many new immigration policies have been implemented and have had an effect on the school. The larger impacts to the school could be attributed to both the travel ban and the decrease in the numbers of refugees allowed to enter the US per year to 45,000 refugees —65,000 fewer refugees than before the Trump administration, according to the Refugee Processing Center. This, in part, diminished the enrollment at the NCNAA at Roosevelt, where enrollment has dropped from 140 high schoolers in 2016-17 to 79 students now.

“We’ve seen a decrease in the number of students since President Trump’s administration reduced the number of refugees allowed into the country,” ESOL teacher Bertha Martinez said. “As a consequence, I think that the number reflects in our school, so now we’re working with smaller groups, smaller numbers. Nevertheless, we are doing the same job, providing information, services, whatever the students need. I think having the smaller numbers of students is beneficial in many ways. For example, I have an opportunity to work with some students more one on one, I’m able to do group work more often, I’m able to do remedial reading with some of my fundamentals of ELA classes, so that more personalized attention. As far as the big picture [goes], though, many teenagers are lacking or they’re not getting this opportunity to come to the United States and have better opportunities as far as education or a better life overall.”

Fewer students has not been the only shift, though. People groups have also shifted. For example, the NCNAA at Roosevelt was once filled with Syrian students, but now only two remain. Now, many Afghani students take their place, in part because many Afghan families have new opportunities to obtain special visas now.

Regardless of the shifts, the students and faculty are still doing the same thing as they always would: learning and teaching.

“I want to learn,” 15-year-old Divine said. “I want to know about different cultures because it can help me help someone from another country not from the United States. I can show them how things work.”

Although students will still continue to learn, the changes in enrollment have left the future of the program unclear. With a decreasing number of students, it becomes a question among teachers of whether the district will justify maintaining the program, which could force the refugees to become part of the mainstream ESOL classes, taking away their ‘soft place to land.’ Or, instead, there may simply be fewer class options. Or teachers will just take on more classes if staff gets relocated out of the school. There has only been speculation among the faculty, and the St. Louis Public School District declined to comment, leaving no sure answer.

“I think our big concern right now is that we have more students leaving us than that, then are coming in, so I guess we’re just sort of waiting to see what the future is going to hold,” Moore said.

That said, the school’s enrollment will always sway as immigration policies change. Therefore, when comparing enrollment to numbers prior to the large influx of students in 2015 and 2016, the enrollment is really returning to what was once normal.

“It’s always changing, you know,” Moore said. “A couple years from now, assuming that we’re still getting students in, we’ll be seeing kids from a different part of the world because there’s always different things going on depending on what’s happening. We will see different kids from different places, and, you know, that’s just something that I think that’s one of the beautiful things about this work is that it’s always different. There’s never a dull moment.”