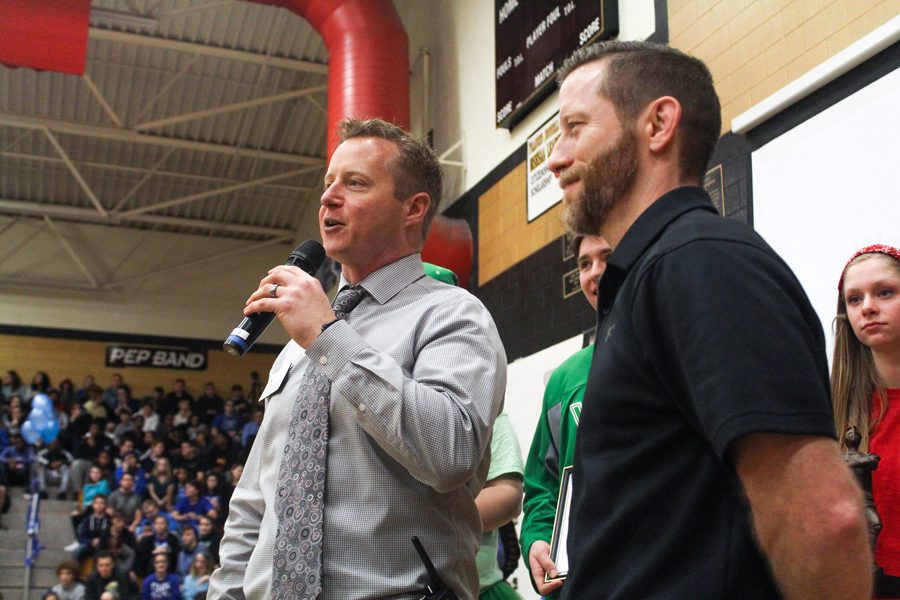 History teacher Sean Fowler receives his Teacher of the Year Award from Head Principal Nathan Hostetler. Before Fowler received his award, Hostetler introduced him in a speech listing off his accomplishments, followed by an eruption of applause from the faculty and student body.

During the Snowcoming pep assembly on Feb. 8, history teacher Sean Fowler was announced as Teacher of the Year for FHN. Following the announcement, the gym erupted with students screaming and congratulating him for his accomplishment. Winning Teacher of the Year was very special to Fowler, knowing that it was his students that nominated him in the very beginning.

“It was very humbling and gratifying,” Fowler said. “I had students nominate me and that was really wonderful, because they are the ones I directly interact with and they know what happens in class.”

Head Principal Nathan Hostetler believes that Fowler has greatly impacted the FHN community and that he deserves to be Teacher of the Year. Fowler is not only willing to go out of his way to help students succeed in class, but also looks out for his colleagues as well.

“Fowler is unendingly dedicated to moving forward and the connection he builds with his kids is pretty remarkable,” Hostetler said. “He is really able to speak into their lives and talk about where they are, especially with the classes he teaches. There is a lot of opportunity for people to  understand themselves and Sean does a really good job of helping to make that happen. Those connections are invaluable, his advocacy for the school is invaluable, so Sean is a good choice.”

While Fowler has made such a great impact here at FHN, he wasn’t planning on going into teaching at all. If it wasn’t for him being hired here to help out a coach, then he most likely wouldn’t have pursued a career in teaching.

“I kinda fell into teaching,” Fowler said, “basically other people got tired of me teaching them in non-teacher environments and got hired here to help out a coach who lost all of his coaches. He really encouraged me, and my wife really encouraged me to go into teaching. There were several times where I didn’t think I was going to stick with this career and I’m really glad I did.”