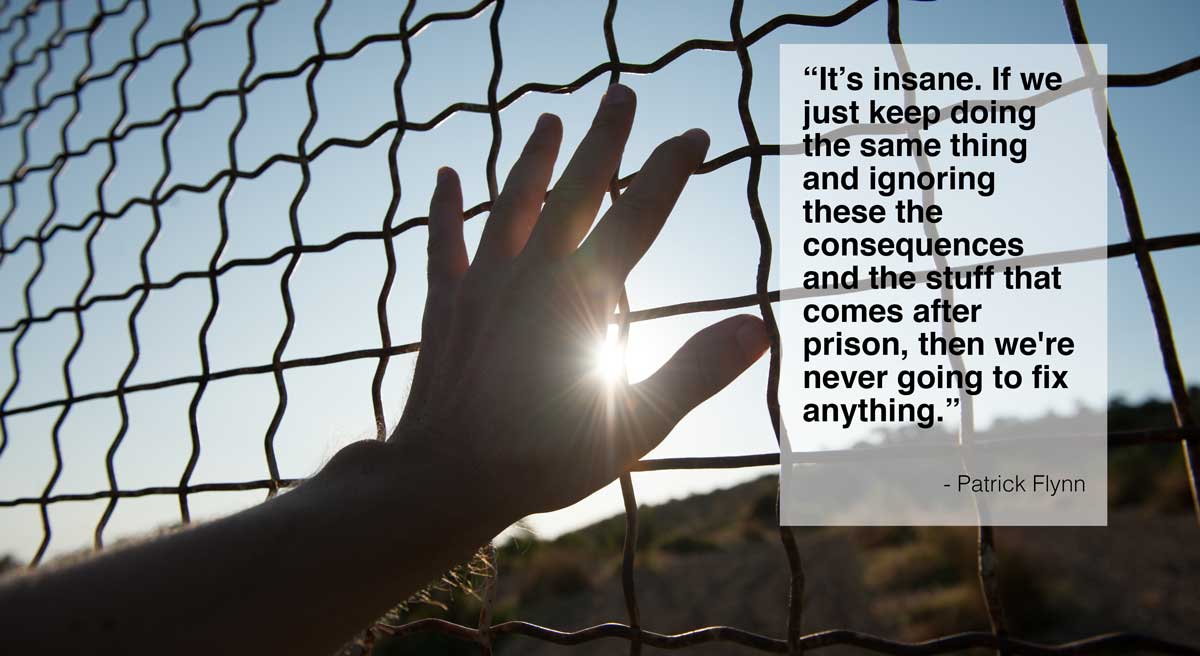 These things await those coming out of the criminal justice system, requiring participants to not only learn to navigate a changing world outside the prison walls, but the requirements to keep them there.

“Minor stresses of having to make their own decisions and go out on their own time can can really mess with the guy’s head and cause him to get himself back into trouble,” FHN Alumni Patrick Flynn said.

Flynn is a case worker at Dismas House, a halfway house in Downtown St. Louis contracted through the Federal Bureau of Prisons to help in an incarcerated individual’s transition back into society. They provide counseling, employment and residential resources to their clients.

“The halfway house is stressful to a lot of guys,” Flynn said. “And it’s hard because the only thing I can relate to is like when I was I went to boot camp in San Diego. You were in boot camp, and it felt like life stopped. But you could look out the window and watch the city move forward. And I can only imagine that’s how it’s like being in the halfway house.”

For many who have been incarcerated in the criminal justice system, reentry into society after staying at the halfway house can be an overwhelming challenge, along with other collateral consequences.

For many inmates, finding employment can be extremely difficult. Many companies do not hire those with criminal records.

“These guys can’t get anything but a [temporary] job starting off paying maybe $10 an hour, and the work is hot,” Flynn said. “It’s nasty. It’s literally the job nobody else wants to do. Money is a huge problem. They come out, and they can’t get the money.”

Up to 60% of formerly incarcerated individuals may end up unemployed after they have been released for one year. Maintaining a job is required under Missouri probation regulations, and many depend on their low income jobs to pay for expenses like child support, restitution, and fines in addition to medical and personal bills.

While staying at a halfway house, the Federal Bureau of Prisons also requires inmates to pay a subsistence fee to help support the services they receive in the house. This fee takes away 25% of a formerly incarcerated individual’s income before taxes. This fee can be waived or reduced, but it can be a challenging process to do so.

“They’re losing the taxes, then they lose 25% of what they made before taxes,” Flynn said. “So, a guy had a $400 check. Now he’s going home with 80 [or] 120 bucks to feed his family, set the groundwork for his life afterwards, find housing, all that.”

While making it all work can be a challenge, there are success stories. Demetrius Washington served a 25-year sentence at Algoa Correctional Center and was released in 2018. He was able to find employment after he was released after working with a local charity, Connections to Success, while in prison. He works two jobs as a brickmaker for Replications Unlimited in Hazelwood and a service assistant at Denny’s. He felt many emotions after being able to hold a job that pays more than $0.05 per hour, the average wage for prisoners in Missouri.

“I was excited,” Washington said. “[To get] my first paycheck as a free man in society, I was overwhelmed. I’m like man, okay, I know I can do this.”

“You gotta accept the fact that you can’t build a skyscraper starting on the 10th floor, you gotta start from the ground up,” Flynn said.

Many inmates will emerge from a sentence in prison into a completely new world. At the time Washington entered jail in 1993, the Internet was not widely used. After he was released in 2018, he had to learn to use a computer and the Internet to complete job applications.

“A lot of things, like people and places, [changed] over 25 years of incarceration,” Washington said. “I was listening to guys coming in saying, ‘Hey man, this has changed and this has changed.’ That way it wouldn’t be a cultural shock to me, which it was. I kind of knew things weren’t going to be the same.”

Finding housing can also be challenging for former prisoners due to lack of affordable housing in the St. Louis area. Those with criminal records are 10 times more likely to be homeless than those without. Formerly incarcerated individuals are not eligible to apply for public housing, and landlords have the legal right to deny someone housing based off a conviction.

“That’s a real struggle here in St. Louis right now,” Flynn said. “A lot of people will release with a family member, which is sometimes good, sometimes not good. But the absolutely homeless guys, those are a struggle. There really aren’t a lot of resources in the St. Louis area that help. There’s a few, but it’s just such a need.”

Through family and community support, Flynn says those who want to have a successful transition back into society for their families should have the opportunity to do so.

“If we continue to punish them, continue to hold them back, we’re almost advocating for them to commit more crime just to maintain a livable wage and a livable life in general,” Flynn said. “They’ve done their time. They did what was deemed fair for their crime. It’s time for us to move on and to try and help them move on.”

Handcuff icon made by Freepik for flaticon.com

Dollar icon made by Dinosoft Labs for flaticon.com