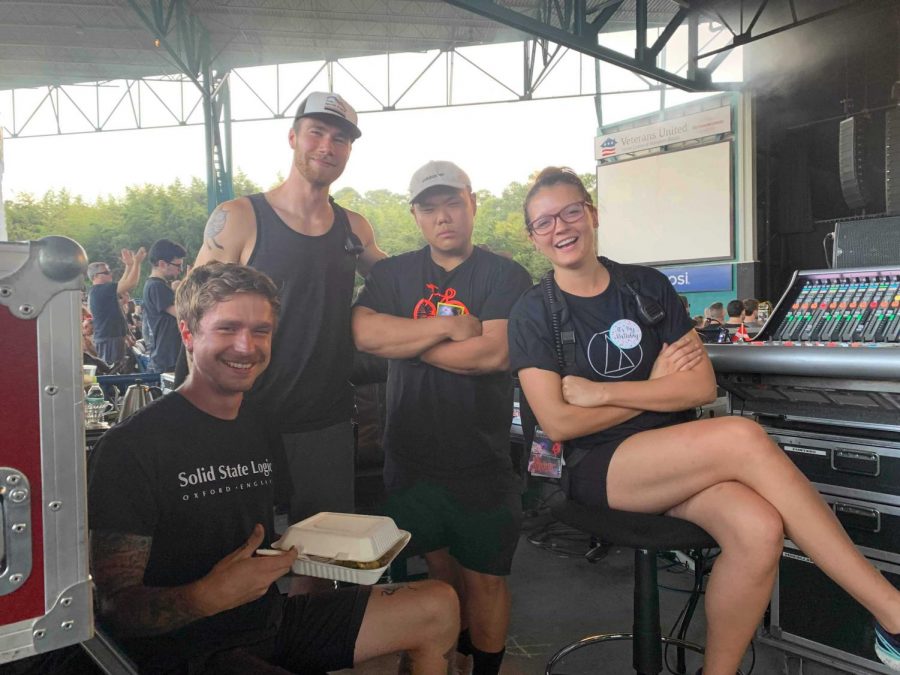 Behind every Taylor Swift, Justin Bieber or Brendon Urie is a tech crew making their performances sound amazing to the audience. Chase Usry, a 2013 Francis Howell North alumnus, is the performer in the shadows, ensuring a great show for everyone involved.

Usry is currently in the United Kingdom working with the heavy metal band Slipknot, a popular band from Iowa formed in 1995. Throughout his time as a specialist engineer he has traveled around the world and encountered a life not many get to experience.

“It’s hard to describe what it’s like until two months in a bus have flashed by,” Usry said. “You hear and you see these pop stars and you think, ‘Life is kinda weird.’ Like they just want to have a good time.”

Before starting his career, he was a North student, working in the backgrounds of drama club performances here at school. As part of the tech crew for the shows he was as proud as the cast members to show off the final product.

“It makes my mom embarrassed, but I remember telling her, you gotta check [this performance] out,” Usry said. “My mom didn’t get it. She came up to me afterwards and told me, ‘Well, can you tell me when you’re in the play.’ It’s fun to go from that to the touring side of it.”

Even then his teachers could tell that he was meant to be in the technology field. He worked hard on the drama performances and pushed himself towards success. This showed itself inside and outside of the classroom.

“Chase was a very mature and likeable kid,” English teacher Shelly Parks said. “He was into and good with technology, even though we didn’t have Chromebooks back then. He liked to mess with computers.”

His teachers and peers may have seen the potential even then, but it was hard for Chase to look at himself objectively, and see what he would best be able to do for the rest of his life.

“I got lucky,” Usry said. “I didn’t have any idea [what I wanted to do]. I knew I would succeed with whatever I tried, but I was aimless.”

To Usry, FHN was simply a stepping stone to the future and not necessarily the college preparation it is for many current high school students.

“At the very least I was pushing myself out of having good friends,“ Usry said. “[FHN] prepared me to get out of high school. [I was] only thinking about the future and not my high school career.”

As a sound engineer, Usry has worked for many artists’ shows before. But it’s not all glamorous. He still has to get up early, check the sound, time delays, just like any other job.

“You hear the big name and assume it’s cool, but 60 percent of my day is pulling dirty cables out of dirty boxes,” Usry said. “It’s not all that flashy. Now I see shows as just happening. It’s like going to work.”

All comments will post automatically. The Editorial Board reserves the right to remove any inappropriate comments.
All FHNtoday.com Picks Reader Picks Sort: Newest