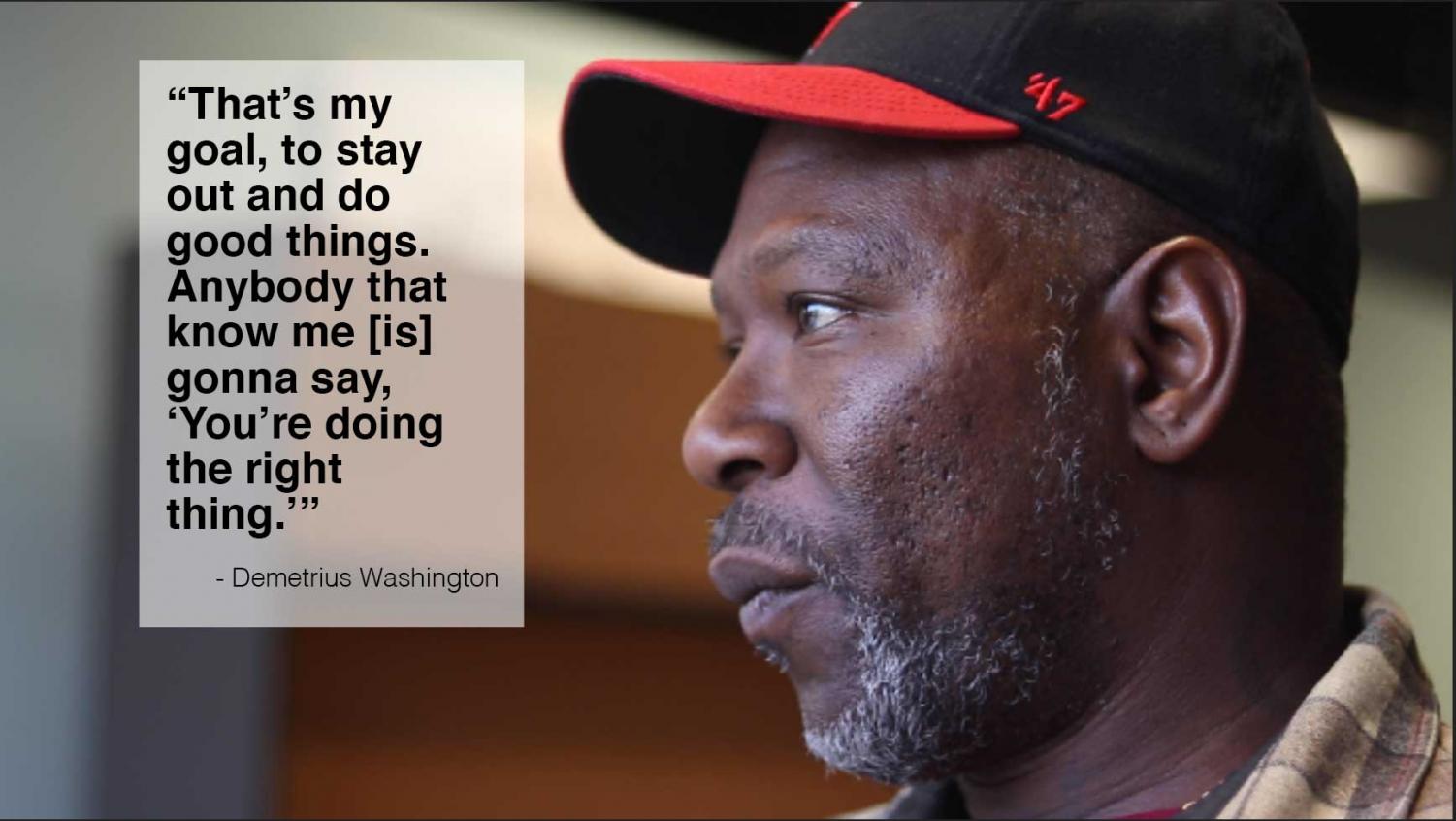 Out of the many worries and reservations Demetrius Washington had when he was preparing to leave prison, he had one thing he was looking forward to.

He wanted to eat.

“I went to eat at some of the places that I hadn’t ate in years,” Washington said. “Man… Pizza Hut, KFC, soul food, a lot of pies and cakes and stuff.”

After reuniting with his wife, Washington had the opportunity to experience many things he had missed during his incarceration. While relaxing in Texas and Florida with his family on vacation, the fears and paranoia from his early days in the prison system melted away as he looked ahead to his future. Washington, a father, and grandfather, had something bigger to look forward to. He finally had the opportunity to make up for lost time as his family supported him through his transition back to normal life.

“That’s what makes me be motivated,” Washington, who has three children, said. “Knowing that they’re content with me. I put my family first, because at first I didn’t. As a young man in society, we don’t think about our families [and] close friends.”

Washington was born in St. Louis, but moved to St. Charles in 1988. He retained his friendships from his life in the city, where he became involved in the Bloods gang. He began selling drugs and drinking heavily.

“I had to go back and do a self-examination and say, ‘These are the things that I did as a young person,’” Washington said. “Now, I’m a man. Let me start doing the right thing.”

In 1993, Washington was sentenced to 25 years in prison. His gang life overflowed into his incarceration. During the first 12 years of his sentence, he was known as a pusher, someone who is charge of standing up for the other members of his gang.

“The gang didn’t love me, and I didn’t love myself, because I was digging myself deeper and deeper into the prison system,” Washington said.

His parents visited him in prison often, but couldn’t do much to prevent Washington from becoming more institutionalized. According to Washington, his mother was hurt by the violent path her son had taken in prison. One day though, an older inmate watched Washington interact with his parents, and pulled him aside in a conversation that would change his life forever.

“It was an older guy [who] told me, ‘Young man, you got a chance to go home,’” Washington said. “He was in the same position I was in. But in reality, he was happy. I wasn’t happy. He knew where I was headed. He made me see something that day.”

Washington began to take back his life as he entered the later portion of his sentence. The violence of the past 12 years fell behind him, and he was named a model prisoner. He used his status within his gang to help moderate problems between other prisoners, and reconnected with his faith.

“I love God,” Washington said. “I love talking about him. He’s the driving force in my life now. I try to be humble and submissive to what [God] wants me to be.”

Washington was an avid reader during his time in prison, reading law books to help increase his education. He was ready to enter a new era as he entered the final years of his sentence, but it wasn’t to come without hardships. Washington’s mother and biological father passed away in 2017, almost two years before he was released.

Without the support of his parents, Washington felt the pressure of stepping up to help his younger brothers and sisters while working to transition back to normal life.

“I had a whole lot of mixed emotions,” Washington said. “Am I going to be successful? Am I going to stand up to what I said to God? All types of things go through your mind.”

Washington enrolled in the Connections to Success program in prison to help learn interview and job skills to be able to support his wife and family. Wealth and fame are not important to him, he says, as long as he can continue to do good things.

“If I can go back and change some things in my life, I would, you know, [change] my values to be this,” Washington said. “Why worry about that? I wouldn’t be the man that I am today if I didn’t go through what I went through. Sometimes, we got to go through these types of things to realize who you are as a person.”